For the 8th edition of the annual event Night of the Dictatorship, the central question is ‘how compliant are you?’ We thoughtlessly click every link we see and leave digital traces of ourselves behind …

Marlies Glasius is one of the panelists in an Authoritarian Speechbattle

With lectures by tech blogger Jamie Bartlett and Marlies Glasius 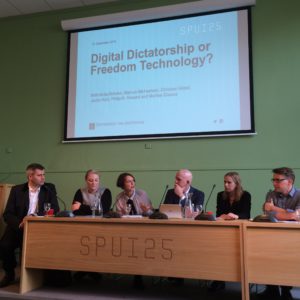 What we know about authoritarianism and the Internet today

Twenty years after the onset of mass adoption of the Internet, its effects on authoritarian rule are ambiguous. Citizens of China, Iran or Malaysia are using the Internet to spread information about corruption or to organize a protest meeting. But some websites in these countries are also blocked, dissidents targeted by cyberattacks, and critical messages drowned by regime propaganda. Our expert panel engaged with the question: how do authoritarian regimes handle the Internet?

What do we know about authoritarianism and the Internet today? Can the internet be good for authoritarian stability? Anita Gohdes (University of Zurich) talked about the role of Internet control and surveillance in the cat and mouse game between government and opposition during the early stages of the Syrian conflict. Marcus Michaelsen (UvA) discussed how Iranian activists who went into exile are subject to online harassment by state actors. Christian Göbel (University of Vienna) explained how China’s rulers allow citizens to vent grievances through online platforms in order to strengthen their hold on power. Jaclyn Kerr (Georgetown University) gave an overview of the policies of control and regulation that authoritarian regimes have adopted to prevent the Internet having a destabilizing influence. Philip N. Howard (Oxford University) acted as commentator.

How do authoritarian states control their citizens beyond the border?

Citizens of the former Eastern bloc were stuck behind the Iron Curtain, while at the same time dictatorships ranging from Chile to the Soviet Union sent dissidents into permanent exile. Today, citizens of authoritarian states such as China, Iran or Russia, can freely travel and study or work abroad. Many have no interest in politics, but some are, or become, political activists, and can be a threat to the regime. How do authoritarian regimes handle potentially dissident citizens overseas?